be quiet! upped its game in mainstream chassis toward the end of 2019 with the Pure Base 500. Priced from £70, the mid-tower frame became the German firm's most affordable enclosure to date, and ticked most of the relevant boxes for a low-cost, no-nonsense build.

We came away generally impressed and commented on be quiet!'s ability to maintain a good standard of build quality at more accessible price points, but there was a feeling that a few small tweaks would elevate the chassis to another level. Turns out we weren't alone with that train of thought, as be quiet! has quickly followed up with an upgraded unit dubbed the Pure Base 500DX. 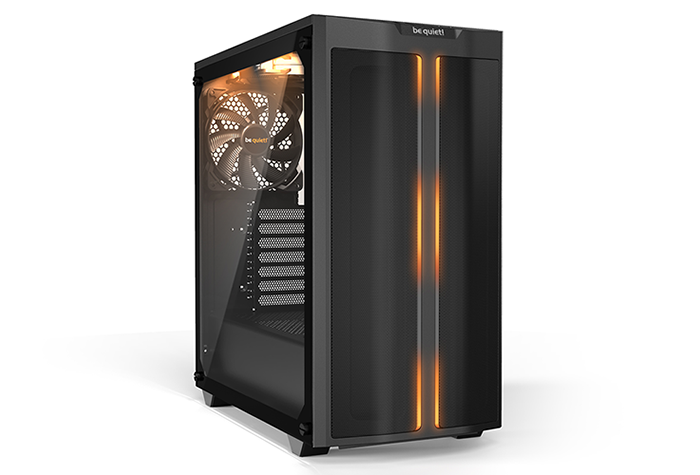 Given that the 500 and 500DX share essentially the same underlying steel frame, it is worth revisiting our original review for a more thorough overview. Those familiar with the form factor will immediately notice one key change; the solid, airflow-restricting front fascia of the Pure Base 500 has been swapped out for a panel lined with two large mesh inserts.

The goal is to increase air throughput, and with the focus having shifted from low noise to maximum performance, there's no sound-dampened top panel included in the bundle; a vented cover is the default, with the same magnetic dust filter as its predecessor. Cooling enthusiasts will no doubt be delighted, however there is a trade-off in that the 500DX doesn't look quite as sleek as the regular 500. The curved plastic frontage has an odd look that isn't helped by strips of RGB lighting down the middle, and given that we were particularly fond of the metallic grey colour option on the Pure Base 500, it's a shame to find the new-and-improved model only comes in black or white.

We reckon the 500 is easier on the eye, but there's no denying the 500DX comes equipped with a more impressive specification sheet. Firstly, and in keeping with the high-airflow theme, the number of pre-installed 140mm Pure Wings 2 fans has been upped from two to three. By default, be quiet! has these configured as a front intake, a rear exhaust and a top exhaust. The trio is all fed via three-pin connectors (rather than the preferred four-pin PWM), and there's no fan hub or splitter cable included in the box, so be sure you've enough motherboard headers to power them all.

Addressing another frequent complaint aimed at Pure Base 500, the top I/O panel has been revised, with a USB 3.1 Gen. 2 Type-C connector taking the place of one of the two USB 3.0. We're pleased to see the inclusion of Type-C, however be quiet!'s implementation isn't the tidiest, as the smaller Type-C jack is simply housed within the existing Type-A cutout as opposed to being entirely reworked. There's still no reset switch, which you may or may not miss, however if your motherboard lacks an addressable RGB header, there is a lighting toggle button available to the right of the audio jacks.

The DX is clearly intended to be a showier offering. In addition to the two vertical strips of 14 addressable LEDs on the front panel, a further RGB strip with 10 LEDs is positioned in the roof of the chassis to accentuate your contents. Not necessarily our cup of tea, yet the lights are easily powered by a single SATA connector and don't detract from the fact that this is a well-laid-out enclosure that is easy to work with.

Dimensions of 463mm (H) x 231mm (W) x 450mm (L) are relatively petite for a mid-tower frame and all of the highlights of the Pure Base 500 are present. These include a shrouded PSU bay, seven expansion slots, 369mm graphics card clearance, 190mm CPU cooler clearance, and a choice of three dual-bay storage solutions; a 3.5in cage at the bottom of the case, a 2.5in tray behind the motherboard tray, and a 2.5in column alongside the motherboard that doubles as cable-routing mechanism while putting your prized SSDs on full display. 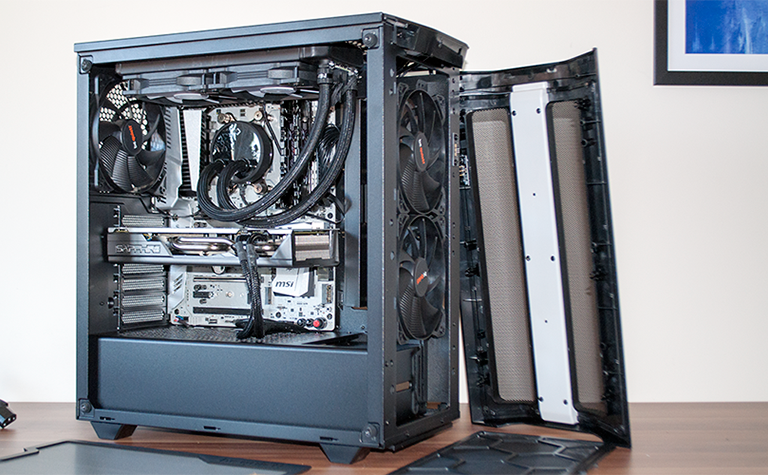 As before, the case offers half-a-dozen potential fan-mount locations. The front accommodates up to two 140s or three 120s, there's room for either two 120s or two 140s in the roof, and either a 120 or 140 in the rear. In terms of liquid-cooling support, the arrangement allows for up to a 240mm radiator up top, or up to a 360mm in the front, though you will need to remove the hard-disk cage to make the latter possible.

We've opted to relocate the pre-installed 140mm top exhaust as a front intake, allowing for our 240mm radiator and AMD Ryzen test platform to slot in with ease. The build process proved problem-free from start to finish, however enthusiasts should be aware of some of the limitations that remain. Oversized E-ATX boards a no-go - it's Mini-ITX, Micro-ATX or ATX only - there are no provisions for a vertical graphics card, and an absence of 5.25in bays means no optical drive.

Nitpicking to the extreme, I'd personally like to see the sleeker, sound-dampened exterior of the Pure Base 500 married to the fan and connectivity arrangement of the Pure Base 500DX. be quiet!'s design team just let out a collective groan, but let me say that the little value-adds scattered around the enclosure don't go unnoticed. The top, front and bottom are lined with full-length dust filters (the bottom handily pulls out from the front), Velcro ties around back help make light work of cable management, captive thumbscrews are in all the right places, and the tinted tempered glass side panel provides an elegant view of the innards. 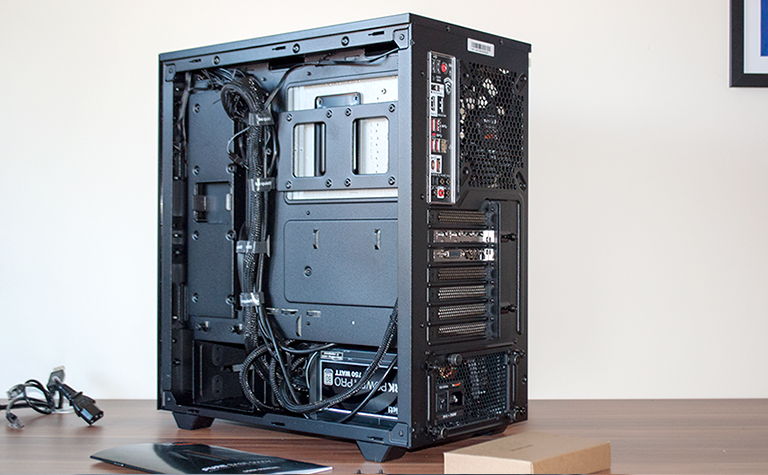 be quiet!'s revisions ultimately help enhance the product's appeal, but as expected they do have a knock-on effect on price, which rises to £90. The inclusion of Type-C connectivity, a third 140mm fan, aRGB lighting and a tempered-glass side panel as standard make the Pure Base 500DX a pricier proposition - the newcomer costs almost 30 per cent more than the most basic Pure Base 500 - though we're pleased to see it remain a double-digit solution.

Now, how about that increase in airflow? Let's run the benchmarks and compare both variants side-by-side.