Deepcool's approach to enthusiast hardware has served up some interesting products in recent years. The Chinese firm typically looks at established solutions and then introduces a price-competitive alternative of its own. 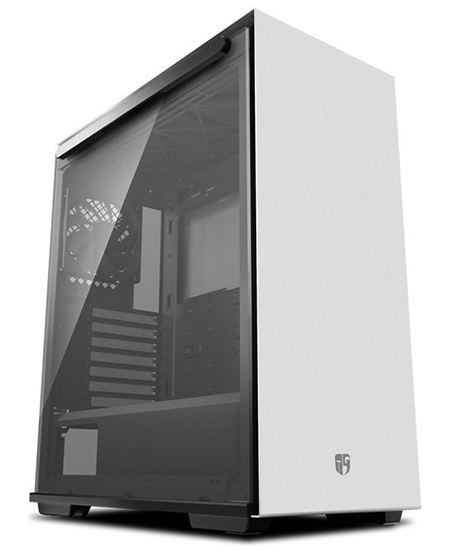 At first glance, the Macube 310P could easily be mistaken for an NZXT case. The matte-white paintwork, solid frontage, PSU shroud, two-tone colour scheme and tempered glass side panel all convey a similarly clean and minimalistic feel. And that's no bad thing; from the outside, Deepcool has presented a tidy package that's sleek and easy on the eye, and completely free of gaudy RGB lighting.

Pricing, of course, is key, and at the time of writing, Macube 310P is making its way to UK stores carrying an attractive £65 price tag. That's around £10 less than the competing NZXT H510, however after spending the last few days getting acquainted, we've found there are pros and cons to Deepcool's mid-tower offering.

Let's start with what works well. Dimensions of 425mm x 215mm x 495mm are about right for a mid-tower frame designed with high-end gear in mind, and accessibility is excellent due to magnetised panels on both sides. On the component side, the tempered glass panel is hinged on the bottom, and then secures neatly using magnets at the top, with a branded bar in situ to help pull the panel open. The magnets on the opposite panel don't feel quite as strong - an accidental brush of the opening tab can be enough to pop the panel off - yet we've enjoyed being able to get in and out of the case with such ease. We're surprised more manufacturers haven't taken a magnetic approach, as it results in a far tidier finish than traditional thumbscrews.

Full disassembly is achieved by giving the steel front and top fascias a firm pull, and if you are worried about security, a pair of side-panel securing tabs are included the bundle to help prevent the unwanted venturing inside the PC. With everything opened up there's a good amount of room to work with. Motherboard form factors up to ATX are supported, a 7+2 PCIe slot arrangement provisions for a vertical graphics card mount, and there are four dedicated storage trays; dual 2.5in sleds behind the motherboard; plus two 3.5in trays in a cage located toward the end of the PSU bay.

The number of fan mounts appear plentiful, too, with Macube 310P allowing for a 120 in the rear, and your choice of three 120s or two 140s up top and in front. We also have a trio of rubber-grommeted cable holes, Velcro straps to help with cable management, a basic four-way PWM fan hub, and a nifty GPU bracket that can be raised vertically to help support an overweight graphics card and guard against the dreaded sag.

On paper, one would assume a powerful build to be straightforward, yet in practise we did discover a few niggles along the way. Firstly, while there are seven fan-mount locations in total, the top rails aren't offset, and we were unable to install our 240mm radiator in the roof of the case due to the fans fouling our motherboard heatsinks. The radiator assembly fits up front just fine, however the setup isn't ideal, as unlike the perforated top panel, the solid front fascia isn't designed for optimal air flow. Those slender 13mm intake channels either side aren't going to provide a huge amount of clean air, and they serve as the only dust filters for any installed chassis fans.

There's an unexpected snag in the PSU bay, too. Fitting our be quiet! supply proved to be a struggle, so we thought, no problem, let's just remove the hard-disk cage. Guess what? You can't. While you can move the cage over slightly, it isn't possible to slide it out as it fouls the hinge for the side panel. Deepcool must have put the cage in situ prior to fixing the shroud during assembly. A minor nuisance as you can still unscrew the cage and slide it over while installing the power supply, yet it would be nice to be able to remove the drive cage entirely.

Build quality is decent but not quite up to NZXT standards - the rear panel showed noticeable flex when inserting the I/O shield - and the only supplied fan is a basic 120mm exhaust with a choice of three-pin or Molex connection. There are some nice touches - both the GPU bracket and fan hub are useful - however Deepcool has missed some of the finer details that could have helped complete the package. The I/O ports on the top-front edge, for example, are a standard arrangement of audio jacks, two USB 3.0 Type-A and power and reset buttons. Omitting USB-C puts the case at a disadvantage to modern rivals. 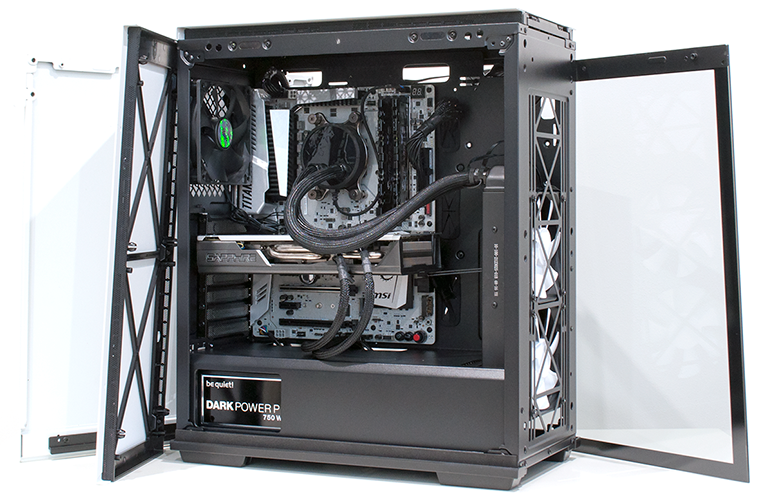 Creating a build that's easy on the eye doesn't take a whole lot of effort, though the jury's out on the cutout to the side of the PSU shroud; are users really that eager for their power supply to be seen? Cable management is decent throughout, with routing options above, below and to the side of the motherboard, as well as 23mm of clearance around back. Speaking of clearance, CPU coolers can stand up to 165mm in height, PSU support extends to 160mm and graphics cards can measure up to 330mm in length.

Some good, some not so good, but the big question mark is how will our components fare with the radiator fixed behind that solid front panel? Let's find out.