A promotion available to buyers of new PCs is due to start on 2nd June according to sources quoted on WinSuperSite.com. People buying new PCs with Windows 7 installed will be eligible to buy an upgrade to Windows 8 Pro for a fee of $14.99 in the US, no prices for other regions have been unveiled.

Low price or free upgrades have traditionally been available from Microsoft in the run up to a new operating system version launch. The tactic is often used to prevent a PC sales drought while users put off upgrading their PCs for an extra few months until the new Windows version is released. 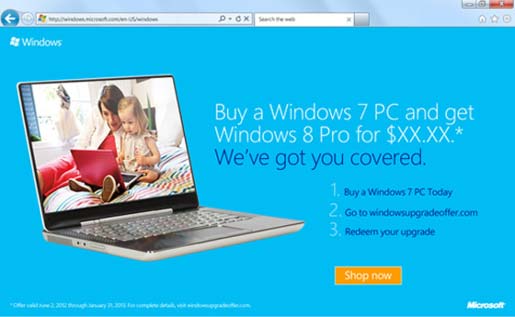 Windows 8 is due to be launched in the Autumn of this year and be accompanied by the launch of a significant amount of new hardware, such as new generation Ultrabooks and tablets, utilising its new touch friendly interface features. The promotion, starting on 2nd June and ending in January 2013 will help keep sales of PC going up to this launch time which will be after the important back-to-school season.

I don't get why you have to pay again though? Surely you've already kinda paid for it?