Windows 11 was released as a beta build for Windows Insiders at the start of this week. In the last week, many a column inch and forum post has been devoted to the OS system requirements, particularly regarding TPM and processor generation. Thankfully, Microsoft has relaxed some tech spec requirements for early testers, and signalled that it will look into doing the same for the general release of the OS. Many HEXUS readers are now running Windows 11 Dev Channel, Build 22000.51 their PC desktops and laptops.

Comparatively little attention has been given to the Windows 11 on Arm test release. Officially, only these Qualcomm Snapdragon processors are supported, but this seems to have been relaxed for Insider testers too. Thus, in the last couple of days tinkerers have been able to shoehorn Windows 11 onto devices as diverse as the Microsoft Lumia 950 XL and Raspberry Pi 4, and share some interesting observations.

Gustave Monce, who is quite well known in some circles for his ports of Windows 10 to the Lumia 950 XL, has been quite quick off the mark to share an interesting video of the new Windows 11 running on this 2015 vintage smartphone.

As Monce says, his one day porting work has delivered Windows 11 to this very small screen. The new OS works quite fluidly, and the larger touch targets in the UI seem to help at this scale. The device still offers calls functionality, as Windows 11 recognises the embedded LTE modem. For the record other key specs of the Lumia 950 XL include; an 2560 x 1440 pixel AMOLED screen, Qualcomm Snapdragon 810 with four Arm Cortex-A57 and four Arm Cortex-A53, as well as Adreno 430 graphics, 3GB of LPDDR4 RAM, and 32GB of eMMC flash on board. 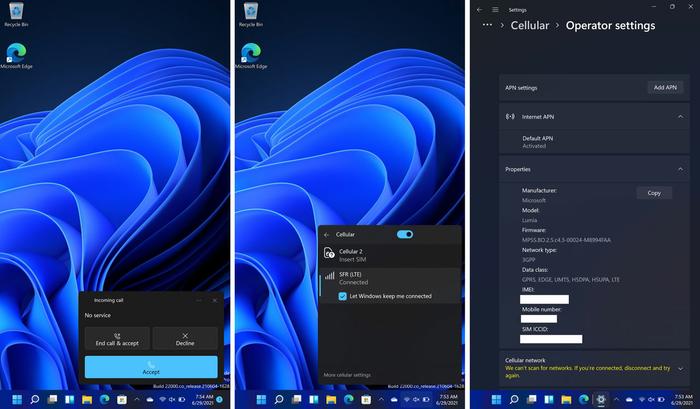 One of the more interesting things about the above is that the new Android app emulation in Windows 11 might breathe new life into these old Lumias, for those inclined to tinker. Monce provides a guide and tool to help users put WOA builds on their Lumia 950/XL smartphones, but warns that it is possible to 'brick' your device.

Raspberry Pi 4 users with Windows 11 ambitions may be interested in a Reddit post by theSPEEDCAT, which outlines a very simple method of trying out the Insider build of Windows 11 WOA on your SBC. 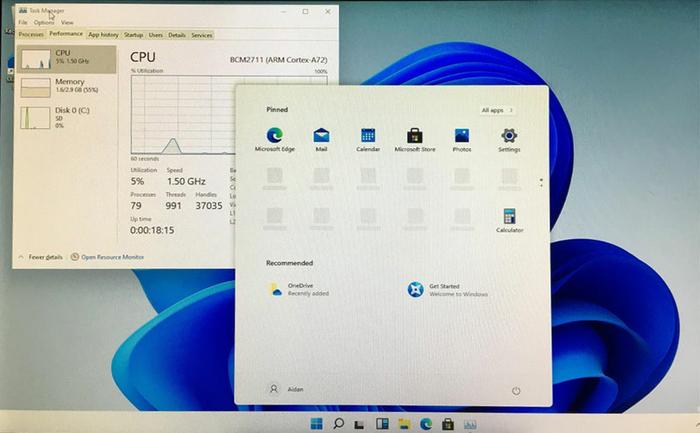 Apparently the OP simply downloaded the WOA 11 ISO using a tool called uupdump, flashed it to an SD card using GPT (not MBR), followed a guide for booting Windows 10 on the RasPi and booted up the RasPi4 with Windows 11 successfully. TheSPEEDCAT shared a few images documenting his success, and you can find one of them above, showing the desktop and Task Manager / Performance Monitor.

Posted by [GSV]Trig - Thu 01 Jul 2021 15:17
So do we think that Windows 11 is actually a coming together of many other strains of Windows and will now be much more in tune with ARM CPU's as well as x86 stuff..
Perhaps now we will start to see Windows Phone make a comeback..

cheesemp
I saw this yesterday and thought - Hmm - I'd like to try Windows 11 on a phone. A windows phone device can't be that expensive now. Turns out a 950xl is £150+ still. Colour me surprised (just like when I saw how much a Windows RT devices goes for).

We should get Genesis to release a song about it…