Performance PC memory specialist G.Skill has launched a range of memory modules specifically for users of the new AMD Ryzen 3000 desktop CPUs and X570 motherboards. A full range of the new G.Skill Trident Z Neo Series DDR4 RAM kits will be made available in capacities ranging from 16GB (2x 8GB) to 64GB (4x 16GB). Kit speeds vary from 2666MHz, through 3000 and 32000MHz options to 3600MHz.

As DDR4 memory frequency support has "increased by leaps and bounds" with the arrival of the new processors and motherboards, G.Skill thought it appropriate to engineer the Trident Z Neo "to achieve optimal performance with the latest AMD Ryzen 3000 series processors on AMD X570 motherboards". You can read more about the importance of fast memory to this platform in the HEXUS review of the AMD Ryzen 9 3900X and Ryzen 7 3700X processors. 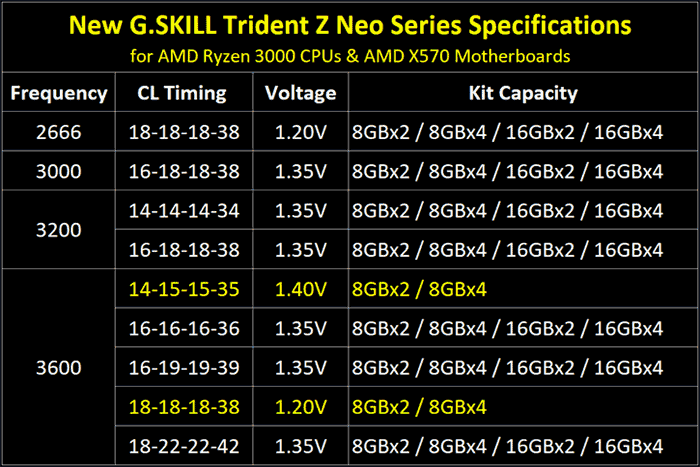 On the topic of performance, there are a wide selection of kits being put together for AMD enthusiasts, as can be referenced in the table above. G.Skill's Trident Z Neo DDR4 will be available in capacities from 16, to 32, to 64GB and in the various frequencies shown. You can see G.Skill has chosen to highlight two if its 3600MHz kits; one in 16 and 32GB capacities with 14-15-15-35 CL timings at 1.40V, and another in the same capacity options but with 18-18-18-38 CL timings at 1.20V. G.Skill says it has achieved this performance using hand-screened high performance ICs and custom 10-layer PCBs. 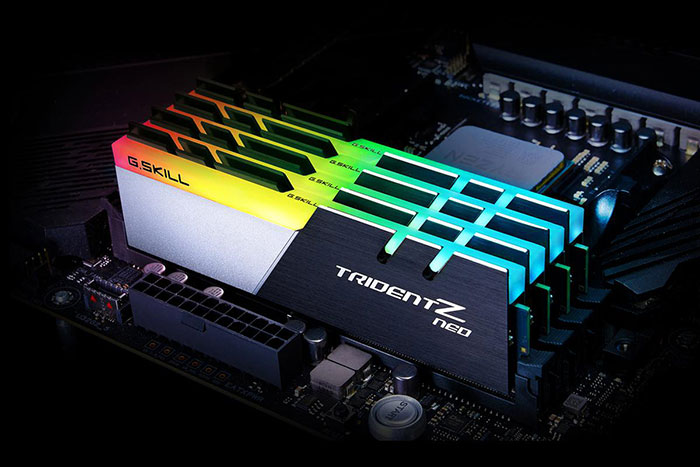 As well as offering great performance, the new G.Skill Trident Z Neo modules look rather appealing. The designer has used contrasting black brushed aluminium and powder-coated silver for the heatspreader design, plus an asymmetric division between the two tones. Atop of the modules you see six angled fins and between these you will see the smooth 8-zone RGB lighting rod. These RGB LEDs are fully customisable and controllable using the Trident Z lighting control software, which already supports the Trident Z RGB and Trident Z Royal series. Alternatively you can add these modules to your Asus Aura Sync, Gigabyte RGB Fusion, MSI Mystic Light, and ASRock Polychrome setup to simplify/sync overall system lighting. 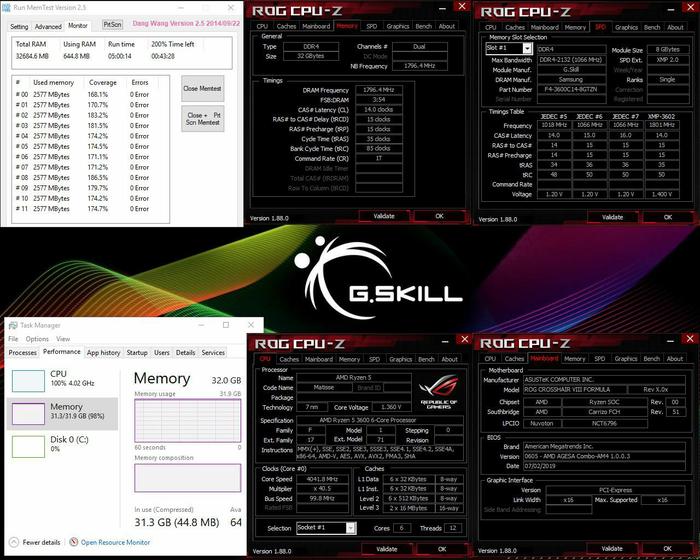 G.Skill is yet to announce availability and pricing of its Trident Z Neo DDR4 RAM kits. However, the kits should start to become available later this month via the usual channels.

Posted by Tabbykatze - Tue 09 Jul 2019 10:21
Ooft, that's nice but it ain't gonna be cheap!
Posted by Corky34 - Tue 09 Jul 2019 10:28
Now we just need to know if faster than default RAM speeds effect performance in a similar manner as they did with previous generations, i assume it does but i would be nice to have that confirmed before spending more than necessary.
Posted by LeSWiS - Tue 09 Jul 2019 10:48
It might be late but I don't really understand. I thought that with Zen 2 there was no need for tuned memory for a specific brand of cpus anymore. Does that mean that memory kits are usually tuned for intel cpus in general(by that I mean that shouldn't it work “optimum-ly” with either brand from the start?)? Or is this only due to infinity fabric process…? I don't recall needing specifically tuned memory kits for intel or amd when I built one of my 1st pcs which was an athlon xp barton 2500 when it just got out at that time. If someone could explain, it would be greatly appreciated.
Posted by adidan - Tue 09 Jul 2019 10:48

Corky34
Now we just need to know if faster than default RAM speeds effect performance in a similar manner as they did with previous generations, i assume it does but i would be nice to have that confirmed before spending more than necessary.

This is all i've found so far.

Corky34
Now we just need to know if faster than default RAM speeds effect performance in a similar manner as they did with previous generations, i assume it does but i would be nice to have that confirmed before spending more than necessary.

This is all i've found so far.

Looks like it may make a few fps difference at 1080p running 3600 over 3200, not sure it would at resolutions above that. All of the measurements were at CL18 too so it's not really in depth.

This is the thing. Faster RAM, tighter timings, etc. are pointless outside of benchmarks. The cost/improvement ratio is nuts! I get wanting the best, and in the past I've definitely gotten parts that I didn't need just to get a bit more oomph, but bleeding edge RAM is just one of those things that will never make sense to me.