Scientists working at Lancaster University in the UK have secured a US patent for a new electronic memory device which "could solve the digital technology energy crisis," reports Science Daily. The 'Universal Memory' device is said to combine the advantages of both DRAM and flash memory with none of the drawbacks that usually come with such compromise. Furthermore, if the new memory format were to be adopted by data centres it could reduce power consumption by a fifth, it is claimed.

There isn't much explanation about the technology behind the new 'Universal Memory' device in the linked report and the Lancaster University web site is down at the time of writing. In a brief bit of background it is explained that the inventors of the device "used quantum mechanics to solve the dilemma of choosing between stable, long-term data storage and low-energy writing and erasing". Moreover, "the contradictory requirements of non-volatility and low-voltage switching, are achieved by exploiting the quantum-mechanical properties of an asymmetric triple resonant-tunnelling barrier." Much more intricate detail is provided by the Nature journal entry here. 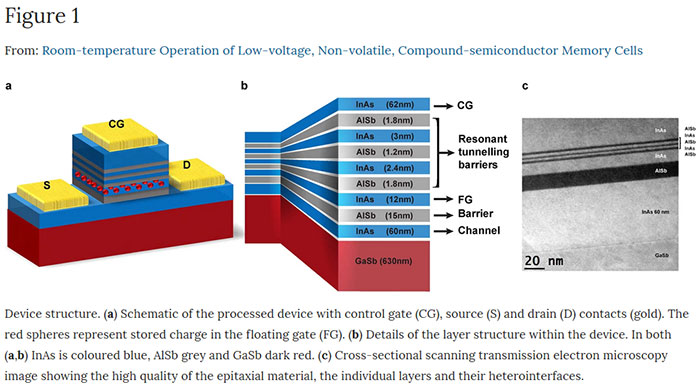 Physics Professor Manus Hayne of Lancaster University, provided some background to the importance of this invention. Hayne said that "Universal Memory, which has robustly stored data that is easily changed, is widely considered to be unfeasible, or even impossible, but this device demonstrates its contradictory properties." The new Universal Memory device is said to have demonstrated the advantages of both DRAM and flash memory "without their drawbacks," continued Hayne, and its intrinsic data storage time "is predicted to exceed the age of the Universe, yet it can record or delete data using 100 times less energy than DRAM". In time the Universal Memory device could replace the $100bn market for DRAM and existing forms of flash memory - a change that would be monumental for the computer industry.

With such big claims being made, I hope for a follow up article or progress report in the near future. The researchers have another US patent pending, and several companies are claimed to have expressed an interest or are actively involved in the research at Lancaster.

Surprised it didn't involve graphene sorcery or carbon nanotubes!
Posted by DanceswithUnix - Fri 21 Jun 2019 16:50
Intel's Xpoint made such bold claims right up until they tried shipping product. Good luck to them, would be lovely if they get it to work but I won't hold my breath.
Posted by philehidiot - Sun 23 Jun 2019 12:39

So old school. Now it's nothing without being quantum in some way. This, of course, features “quantum-mechanical properties of an asymmetric triple resonant-tunnelling barrier”. Now that's marketing progress.
Posted by iggy - Sun 23 Jun 2019 16:44
Looking forward to never hearing about this ever again.