Intel CEO Pat Gelsinger, and CFO George Davis recently sat down for a discussion (.MP4 video link) with New Street Research's Technology Infrastructure lead analyst, Pierre Ferragu. You might have seen Ferragu commenting on tech industry matters before, on channels like CNBC. Of course, the two high ranking Intel execs require no introductions to HEXUS readers. Ferragu, nevertheless, took time at the start of the conference call to rewind a little and talk to the Intel CEO about his return to Intel after his success at VMWare. 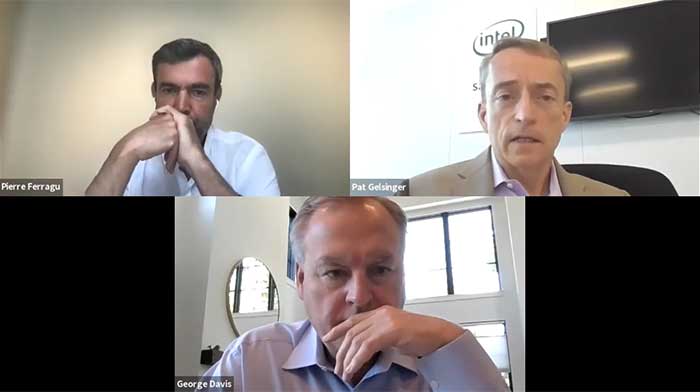 Revisiting the 14 to 10nm transition

Fast forwarding somewhat to the first section of the video which might be of interest to the majority of readers, at about 38mins in, Ferragu asks about the rough transition Intel experienced between 14nm and 10nm nodes. In brief, he got the CFO to confirm that every time Intel prepared to launch a 10nm chip it had to do better than the internal competition – a 14nm alternative – or else what would be the point of a business releasing such a product. It seems to be that very factor, plus the price of producing the newer processors, resulted in the delays, more than anything. With regard to 10nm at the present time, Intel is "powering through it," and preparing to move to a very different process with the introduction of EUV.

At this stage Gelsinger stepped in to explain some of the benefits that he sees as Intel "moves into the EUV generation" - namely a simplified process with fewer mass production steps, and better yield - a good footing for Intel 4, Intel 3, and into the Angstrom era. Gelsinger added that he expects Intel 4 and Intel 3 to be "very competitive," but that Intel 20A and 18A are going to be "leadership process technologies in the industry".

Intel vs AMD in the server space

The next interesting topic covered in the chat concerned competition with AMD in the server market. Ferragu made the observation that AMD gained considerable traction a couple of years back to move market shares to 20:80, but Intel has held fast since that time. Gelsinger confirmed that he sees this market shares split continuing for at least the near future as both companies are running and selling at capacity - they are supply constrained - which won't produce a shift in the market. Of course, Gelsinger says he expects Intel's incremental improvements in server products to slowly turning the tide in its favour, going forward.

Is Intel going to have a Zen moment?

Ferragu closed his conversation with a question about architecture and design. In this segment (about 55mins into the hour), we got some very interesting replies referencing both AMD Zen and Nvidia graphics. The New Street analyst asked if Intel is going to have a "Zen moment," – referring to AMD's breakthrough architecture change back in 2017. In answer, the Intel CEO talked about his firm "redoubling down on manufacturing" prowess, and highlighted the recent Architecture Day event, where Alder Lake, with its heterogeneous architecture, was detailed. Gelsinger quickly segued to the major enhancements to Intel's GPU architectures, too. With reference to Intel Xe, he said that "we're going to start being in a position to really put pressure on Nvidia for the first time in forever". 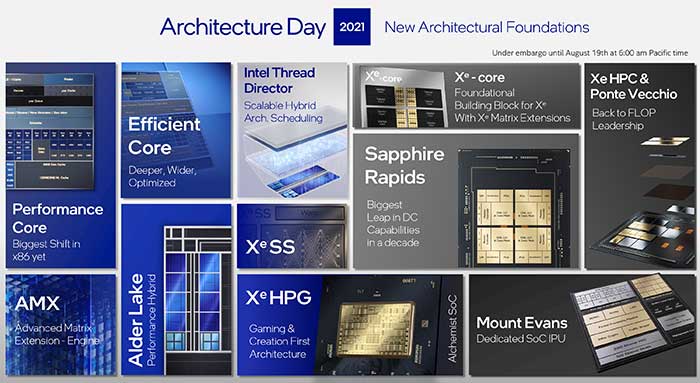 The geek is back at Intel

Before signing off, and again on the topic of a Zen-like architectural shake-up ahead, Gelsinger teased that "trust me, we have a few that are still cooking in the labs… that we think are a pretty dramatic step forward… the geek is back."

Well stopped slacking, I would say they are still overpriced.
Posted by ohmaheid - Tue 07 Sep 2021 13:51
Given that Intel are still basically on a struggling 10nm node…It is going to be a few years before the 20a-18a ‘game changing’ products are going to see light of day. Their foray into GPU production is a good thing though. IF they price it sensibly, and production is plentiful.
There is no doubt they are going to take market share from AMD and Nvidia. It just remains to be seen just how much - Given that GPU profitability isn't as good as CPU production.
Posted by philehidiot - Tue 07 Sep 2021 18:13
Aiming for leadership in technology is always best. Apparently shareholders don't like it when you come out and say “we're aiming for a distant but solid second place” to the press.
Posted by kompukare - Tue 07 Sep 2021 19:25

philehidiot
Aiming for leadership in technology is always best. Apparently shareholders don't like it when you come out and say “we're aiming for a distant but solid second place” to the press.

Yes, but shareholders seem to love it if they are promised lots of dividends or a propped up the shareprice via share buybacks.

While no company states where the money for the dividends or buyback comes from, shareholders generally don't mind if it comes from R&D. Which is effectively saying “we don't need to aim to be the best”.