You are here:
Industry CPU News

A transcript of an analyst and investor call hosted by Susquehanna International Group, LLP (SIG) has been shared online. SIG describes itself as a "global quantitative trading firm founded with an entrepreneurial mindset and a rigorous analytical approach to decision making," and it specialises in the technology sector. SemiAccurate's Charlie Demerjian was on the call but a bullet pointed transcript seems to have been shared by a Redditor called uzzi38.

The discussion features quite a few interesting behind the scenes at Intel morsels. The information should be pretty solid, but remember this isn't official from Intel, so perhaps a pinch of salt or two should be applied. Starting with our headline, it seems that "Intel are looking for a new CEO." Will Bob Swan jump or is someone pushing? Apparently four candidates were shortlisted but one has so far been eliminated. It is currently expected that a decision about the new Intel leader will be made in Q1 2021.

SIG started by talking about Intel 10nm production which we know has been extremely difficult for the firm. It says that while 10nm SuperFin is far better than the base 10nm, yields are still on the low side. Cannon Lake had a yield of <25 per cent even with iGPUs disabled fo example, but current 10nm SuperFin processors have a >50 per cent yield, according to the transcript.

Moving onto 7nm, and the information in the call was that "7nm is significantly more delayed than the 6-12 months" claimed by Intel in Q2 this year (see slide below). Thus the Intel Xe-HPC GPU Ponte Vecchio (PVC) is in the hands of TSMC. As for the real length of the delay, it is thought Intel doesn't even know this because of multiple problems it is facing. In Q1 it is expected Intel will have a clear enough view of the scale of its own problems to decide which processors to outsource to the likes of Samsung and TSMC. 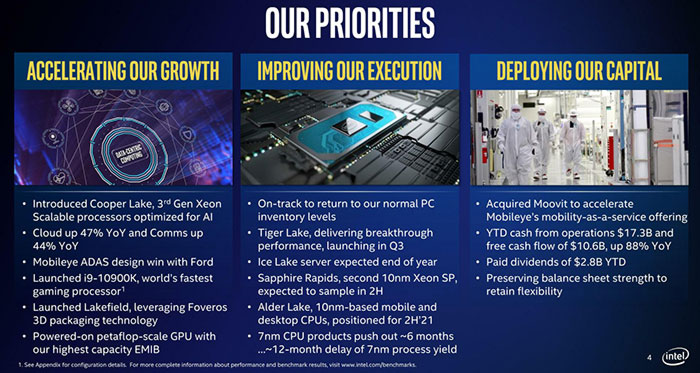 Last but not least there is some talk about AMD vs Intel. Interestingly SIG told investors something along the lines of "If both companies iterate perfectly on their roadmaps as planned (much easier on AMD's side right now), Intel cannot catch up to AMD until late 2024 or early 2025." AMD's largest issue is said to be simply securing enough capacity from TSMC.

An important upgrade on a passive bridge chiplet design spotted in previous documents.

It never rains but it pours…
Posted by Luke7 - Fri 18 Dec 2020 11:18
New CEO is probably a good move… as long as they can find one that it’s an engineering background, not some marketing suit.

lumireleon
INTEL can ‘simply’ use TSMC nodes under a contract just like Global foundries.

Do you mean licensing the technology like GloFo did with Samsung, or actually contracting TSMC for wafers? Either way, there's nothing simple about it.

It would not be easy to port TSMC's process to Intel's fabs even if TSMC had a motivation to license it out. And even if they did, it would not be a quick fix - the deal between Samsung and GloFo was in place for a long time before production started. You can't just copy and paste things between fabs.

Even when it comes to contracting TSMC to produce wafers for them, it's something of a last resort and has many drawbacks. Nonetheless they are apparently still considering this.

Drawbacks include very limited supply, and TSMC are very unlikely to give any sort of priority to Intel, who are likely to be a short-term customer, over long-term customers like Qualcomm, Apple, AMD, Nvidia, etc who are already competing for capacity.
Another issue is it means porting cores to another node (something Intel have done before but only for cores like Atom), and that's not guaranteed to go smoothly - nowadays CPU cores are designed with a target node in mind and it can require significant reworking to get it to just work, let alone compete with other IP targeted at those nodes.
Another is cost - outsourcing to another company means paying them and losing one of the main advantages Intel have had by keeping their own fabs in-house (though that's arguably offset if it means having a competitive product vs not).
I would also say there's a risk of leaving their own fab lines idle which would be bad news, but unless it lasts many more years, they'll probably still be producing plenty on 14nm anyway.