Startup SambaNova Systems has dramatically come out of stealth mode as a new round of funding (US$250m) has been secured. While the firm's current solutions are aiming at efficient AI and data-intensive processing from the data centre to the edge, the Palo Alto, California-based firm has its sights set on a much more industry changing long term goal - a shift from typical Von Neumann computer and components (currently championed by the likes of AMD, Intel and Nvidia) to a software defined computer using reconfigurable data-flow architecture. 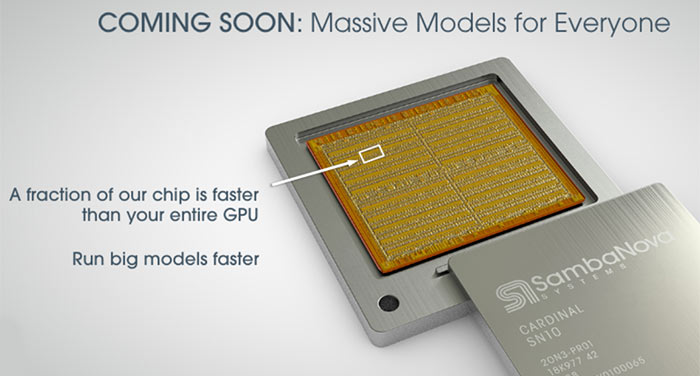 After securing the latest funding (bringing total VC funding to US$450m) Rodrigo Liang, chief executive of SambaNova Systems, took part in an interview with ZDNet. "We are at the cusp of a fairly large shift in the computer industry," asserted Liang. "It's been driven by AI, but at a macro level, over the next twenty to thirty years, the change is going to be bigger than AI and machine learning." For some background, Rodrigo Liang was previously responsible for SPARC processor and ASIC development at Oracle.

Our recent computing history and efforts to progress computing have been focussed upon instructions and operations - and optimising these, said Liang. However, SambaNova is looking at the whole system, across several layers of hardware and software. Using this Gestalt view it is hoped to "really provide a fundamental shift in computing".

Interestingly, Olukotun provided some insight into how the move from Von Neumann machines to a new computing paradigm might occur. In an interview last spring the professor explained to ZDNet that "rather than stuffing a program's instructions into a fixed set of logic gates permanently etched into the processor, the processor re-arranges its circuits, perhaps every clock cycle, to variably manipulate large amounts of data that 'flows' through the chip."

The massive change away from the CPUs, GPUs, associated architectures, and software we have today will require significant capital. The latest funding round isn't just providing $250m from 'random' investors. The group behind this funding includes names like; Blackrock, Google Ventures, Intel Capital, Walden International, WRVI Capital and Redline Capital. Apparently the latest funding round provides an indicative value for SambaNova in the region of US$2bn.

Posted by lumireleon - Mon 02 Mar 2020 14:25
the processor re-arranges its circuits, perhaps every clock cycle,….sounds like a programming nightmare
Posted by Gentle Viking - Mon 02 Mar 2020 16:00
Quantum entanglement on a transistor basis. :-)
Posted by 3dcandy - Mon 02 Mar 2020 16:05
Imagine if Intel were in charge if this….
Posted by DanceswithUnix - Tue 03 Mar 2020 07:39
Very odd, I thought AI acceleration was pretty much a done deal. So many people have already released product.

Being able to reconfigure at a gate level screams to me that this won't clock very high, in the same way that you can design a conventional processor and put it on a reconfigurable FPGA and probably get it to clock at 100MHz. Re-configuring a sea of gates takes time, energy and a lot of configuration data. The only way this makes sense to me is if they are re-configuring to embed the weights of a neural net into the silicon, and the configuration is part of a learning process. That would make for a screaming fast AI processor, but only for nets that are small enough to fit. Perhaps 3D stacking means they hope in the future to build arbitrarily large chips.
Posted by [GSV]Trig - Tue 03 Mar 2020 10:21
Ummmm, call me sceptical but do they actually have any silicon?
Sounds like they're just saying this is whats going to happen in the next 20/30 years (which is a given with tech where it is now) and then managed to get $250m investment based on the guys past job history?