AMD and Samsung have announced a new strategic partnership. The two technology titans will get together to work upon delivering "Ultra Low Power, High Performance Graphics" to mobile SoCs. Of course the plan is to leverage AMD's RDNA graphics know-how in Samsung's upcoming processors - destined for smart devices such as smartphones, tablets and more.

As part of the deal Samsung will license AMD graphics IP and will focus on advanced graphics technologies and solutions with a particular focus on mobile. Rather than doing battle with the likes of Intel and Nvidia in this segment, AMD's graphics IP will be faced with entrenched competition from the likes of Arm and PowerVR. AMD and Samsung will have done their calculations and must think AMD's IP has appeal, even in this ultra low power arena. It is going to be fascinating to see how things develop here.

In a quote in the press-release announcement of the strategic partnership, Inyup Kang, president of Samsung Electronics' LSI Business, asserted that "AMD will allow us to bring groundbreaking graphics products and solutions to market for tomorrow's mobile applications". Furthermore, Kang predicted AMD and Samsung could work to deliver a "disruptive" change to the market and "accelerate innovations in mobile graphics technologies that will help take future mobile computing to the next level." 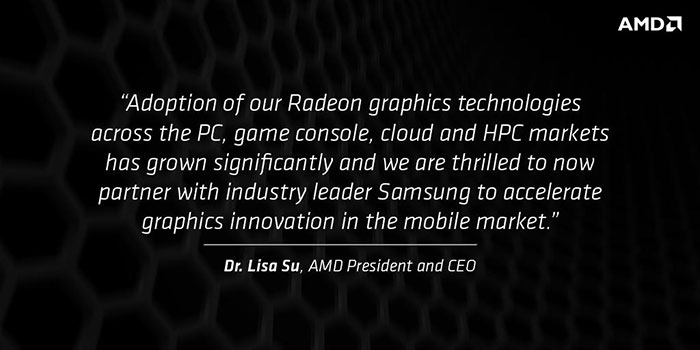 AMD's CEO, Dr Lisa Su, happily welcomed the partnership, noting how Radeon graphics technologies are finding success across the PC, game console, cloud and HPC markets - soon to be joined by the lucrative mobile sector. In a way, AMD is following Arm's licensing model in the mobile segment, as:

AMD's shares are understandably buoyant on today's news, and they were up over 6 per cent at the time of writing. If you'd bought AMD shares at the start of 2019 you would be up nearly 50 per cent so far this year.

Posted by 3dcandy - Mon 03 Jun 2019 16:55
Interesting development. Perhaps Samsung will drop Qualcomm in forthcoming phones now
Posted by fynxer - Mon 03 Jun 2019 17:23
Well they figured out that the advancement of cpu core speed are slowing down and leveling out.

BUT as in PC the GPU makes massive advancements in performance each couple of years.

In the mobile market there is a lot of head room for advancement in the GPU so to differentiate it self from the competition with it's flag ships in a few years they need new GPU tech to take the performance crown.
Posted by Tabbykatze - Mon 03 Jun 2019 17:36

Because whether we like it/agree with it or not, mobile gaming does not seem to be going away.

Homogeneity would be a big boon. I don't know why Samsung use snapdragon for the USA market though, and with that being the case would they be able to alter Qualcomm's SOC to include the AMD GPU?
Posted by SylvanSagacious - Mon 03 Jun 2019 18:56

chj
. I don't know why Samsung use snapdragon for the USA market though, and with that being the case would they be able to alter Qualcomm's SOC to include the AMD GPU?

I forget the specific communications tech, but basically there is something that only America uses and Qualcomm has the rights to it, so if you want to launch a phone in the US you literally have no choice, but to use Qualcomm.

Most people have no idea just how scummy Qualcomm are, they've been sued by pretty much everyone, including the FTC for effectively running a monopoly and using shady practises that would make intel blush.