French researchers have shared a video showing off a robotic limb accessory for smartphones that will be detailed at the ACM Symposium on User Interface Software and Technology (UIST 2018) in Berlin later this month. The USB attached device is shown in a surprising amount of potential applications (good brainstorming), from providing rich haptic feedback, to being used as a complex 'joystick' for UI interaction, to being used as a way to make your smartphone crawl across a surface.

In their description of MobiLimb, scientists Marc Teyssier, Gilles Bailly, Catherine Pelachaud, Eric Lecolinet dryly describe the gadget as a "small 5-DOF serial robotic manipulator". The following key abilities it provides to your smartphone are highlighted:

The MobiLimb can be used in three classes of application as; a tool that can be manipulated to control both physical and virtual objects, a partner reacting to user actions, or a medium providing feedback such as strokes, taps, and similar feedback. 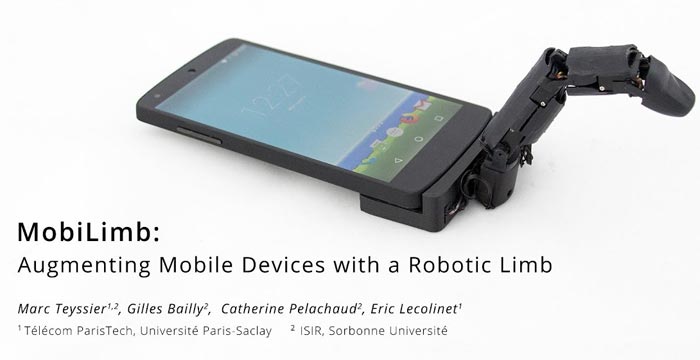 MobiLimb can be used with various sheaths for more fun / realism. In the short demo video above you see it with a furry cat tail used in some kind of 'game', and in the image below, via a New Scientist report, you can see it wearing a human finger sheath. There is a flashlight tip available too. Perhaps readers could think of some other useful sheaths for the MobiLimb. 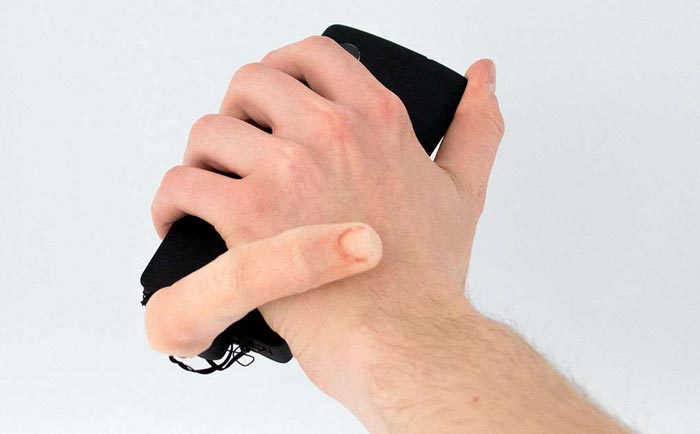 While the MobiLimb has caught quite a few headlines it is just one of many interesting new devices and applications ready for showcasing at UIST 2018 in Berlin, Germany on 14-17th October. See the UIST teaser video for more gems like the 'FacePush' boxing force feedback device for HMDs, and 'SoundBender' dynamic acoustic control.