The Microsoft Flight Simulator Top Gun: Maverick expansion is going to be delayed until May next year. If you are wondering who to blame for the further six months wait, you might want to target your ire at Paramount Pictures who have recently moved the film's release date back, again, to the US Memorial Day weekend, 27th May 2022. They, in turn, point the finger at Covid-19, and the Delta variant in particular.

This isn't the first time Paramount has shifted its Top Gun: Maverick release date. For example, it was supposed to be in theatres on 2nd July, before moving to 19th November 2021, before we got the newest release target date (27th May 2022). Microsoft / Asobo have always wisely stated that the MSFS Top Gun: Maverick expansion would be released to coincide with the film's release without mentioning any specific date, so that hasn't changed. 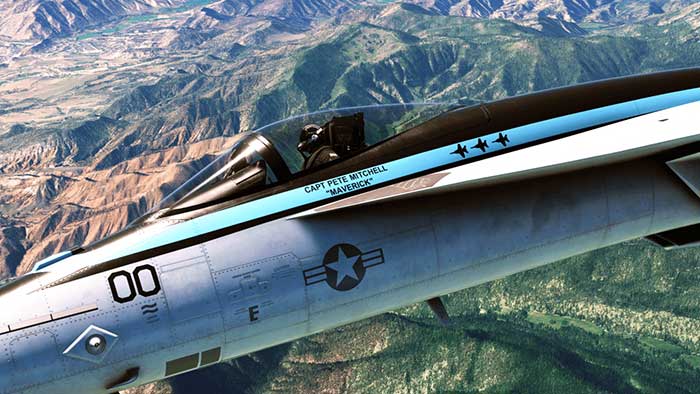 "Paramount Pictures recently shifted the release date of Top Gun: Maverick to Memorial Day weekend, May 27, 2022," wrote the MSFS Team in a short explanatory blog post. "As we have previously announced, the Top Gun: Maverick expansion for Microsoft Flight Simulator for Windows 10 PC, Steam, Xbox Series X/S, and Xbox Game Pass will be released alongside the movie. We look forward to sharing more information in the future."

While we have a rather long six months extra to wait for this free expansion, it is all the more tantalizing as we don't have any clear indication of what it will deliver. The only real info we have to go on is the Flight Simulator Top Gun Maverick - Reveal Trailer, which was shared back at E3 2021. The 30-second segment, embedded above, showed an aircraft carrier being used by US fighter jets, which you later see speeding though some snow dusted alpine valleys. If you watch carefully, you will also see a sinister looking 'Dark Star' aircraft take off from the carrier (about 20 seconds in).