Activision has announced that it is rolling out Call of Duty: Warzone today on Battle.net for PC as well as PS4 and Xbox One. This is a free to play Battle Royale style game based upon Call of Duty IP and of course it contains some attempted USPs to lure an audience. Overall Activision is promoting the game as a "Bigger, Crazier, Free," alternative. The trailer below gives you a taste of the action with a brief overview of the team combat, vehicles, and game modes open to all.

Call of Duty: Warzone is based in the dense and sprawling world of Verdansk. This theatre of war is said to be expansive and consist of multiple named zones. Thus you might find yourself Battle Royaling in distinct areas such as the Gorengard Lumber Yard or the Gora Dam with their very different environmental characteristics. Around the zones in which you battle will be a contracting encircling cloud of poison gas, adding further pressure to the heat of the battle.

In the game you will start by teaming up with two others, to form a power trio and take part in battles with up to 149 others. Then choose game mode: the headlining Battle Royale to fight your way to becoming last squad standing; or Plunder mode where you fight to grab the most cash by looting across the map, stealing enemy cash and/or completing in-game Contracts. These Contracts are objective oriented tasks players can find and activate across Verdansk, and you might need to scavenge, find a series of supply drops, or recon certain areas for payments.

Whichever mode you choose you are encouraged to make use of the in-game vehicles such as 2-seater ATV, 4-seater Tactical Rover, 4-seater SUV, Cargo Truck or Helicopter. Each vehicle has its strengths and weaknesses (off-road-ability, armour, capacity, speed etc). 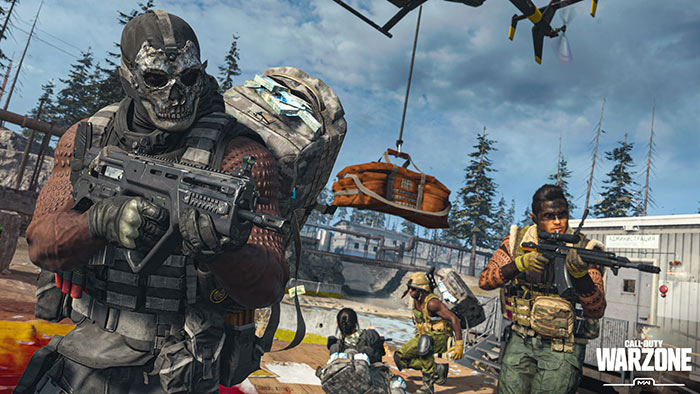 Those who already own Call of Duty: Modern Warfare can access Warzone via the previously named 'Classified' panel in the Main Menu. These gamers will get early access to this f2p title - from 8am PDT or 3pm here in the UK. CoD veterans can carry over content already earned including Battle Pass items, Operators, weapons and customisation items. Adding Warzone to your up-to-date Call of Duty: Modern Warfare install will mean an 18-22GB download.

Those who don't already own Call of Duty: Modern Warfare can download and play Warzone from 12pm PDT (7pm UK time) and will be able to earn progress and items to carry over to Modern Warfare should they ever decide to buy it. This fresh install is going to be a hefty 83-101GB in size. 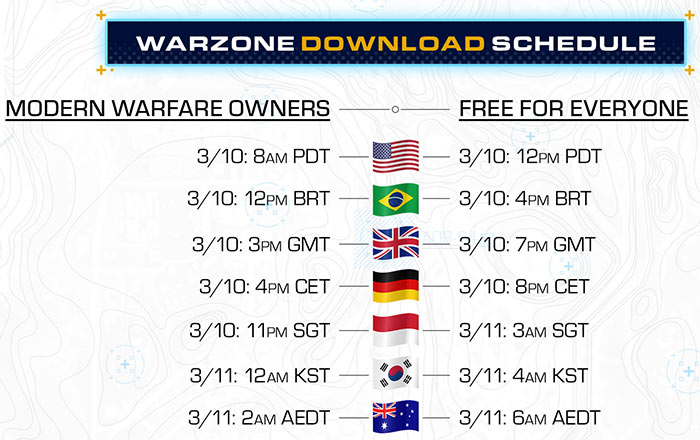 In its favour, there hasn't been a new big name Battle Royale game for a while and the f2p model allows anyone interested to give it a try, cash-risk-free. Activision will be hoping its success means plenty of in-game purchases from the Buy Stations, where players can gain Killstreaks, Redeploy Tokens to bring back fallen teammates, Self-Revive Kits, and more. In-game cash can be earned though playing too. Other payable items are likely to be character customisations and so on. Hopefully, early reviews will look closely at f2p vs pay-to-win concerns.

If its 150 players, surely that should be 147 others?
Posted by Gentle Viking - Tue 10 Mar 2020 14:04
They lost me again on.
plenty of in-game purchases from the Buy Stations, where players can gain Killstreaks, Redeploy Tokens to bring back fallen teammates, Self-Revive Kits

In fact remembering just how bad their “anti cheats” software is for COD-2, COD-3 .. as in non-existent I think I'll give this a wide berth anyway… I decided a long time ago that Activision lost my custom because of this,, and I'm not rewarding their pockets any further.
Posted by Disturbedguy - Wed 11 Mar 2020 12:57

Gentle Viking;4182668
They lost me again on.
plenty of in-game purchases from the Buy Stations, where players can gain Killstreaks, Redeploy Tokens to bring back fallen teammates, Self-Revive Kits

I will buy your game if its good, but after that FU if i have to buy anything.

Eh? maybe do some research before raging unnecessarily? You don't buy with real money, you earn money in game for kills etc, which you can then use to buy stuff is you want…
Posted by Disturbedguy - Wed 11 Mar 2020 12:58

In fact remembering just how bad their “anti cheats” software is for COD-2, COD-3 .. as in non-existent I think I'll give this a wide berth anyway… I decided a long time ago that Activision lost my custom because of this,, and I'm not rewarding their pockets any further.

The “Anti-Cheat” wasn't theirs, it used PunkBuster which was a third party, little EA can do if PunkBuster decide they no longer want to support the game etc..