AMD has written to HEXUS about a couple of hotly anticipated new games; Borderlands 3 and Tom Clancy's Ghost Recon Breakpoint. As well as sharing the PC recommended spec to play these games at popular monitor resolutions, AMD has outlined the various Radeon options and features gamers from the red team will be able to enjoy.

Gearbox has published a blog post about its PC specs reveal. The image below shows the minimum and recommended PC specs to play. As it doesn't make it clear, the minimum specs PC is targeting 1080p gaming, while the recommended specs system targets 1440p gamers. 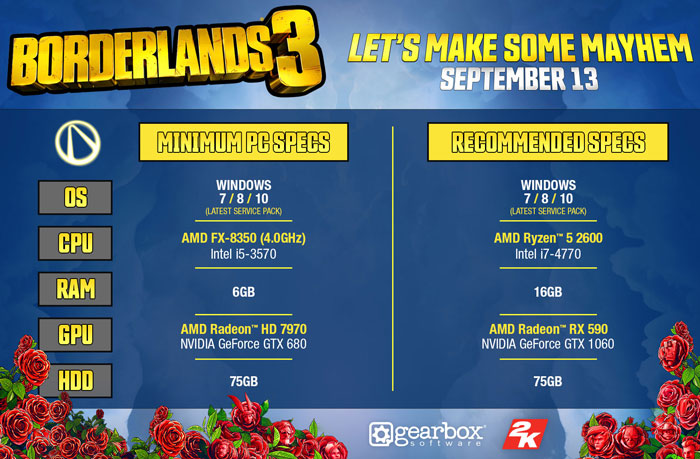 In its email to HEXUS, AMD adds that "Borderlands 3 is optimized for AMD Radeon graphics cards, including ones based on the new RDNA gaming architecture, providing breathtaking visuals, amazing performance, ultra-responsive, silky smooth gameplay, and exciting features". It bullet points the following AMD features supported in Borderlands 3:

Borderlands 3 will be released as an Epic Store exclusive (6 months) on Friday, 13th September.

Ubisoft has penned a blog post outlining PC exclusive features and recommended specs for Tom Clancy's Ghost Recon Breakpoint. Again, the developers have created a natty infographic specs list - but this time there are a greater number of permutations catered for - low and high settings, and resolutions up to 4K. 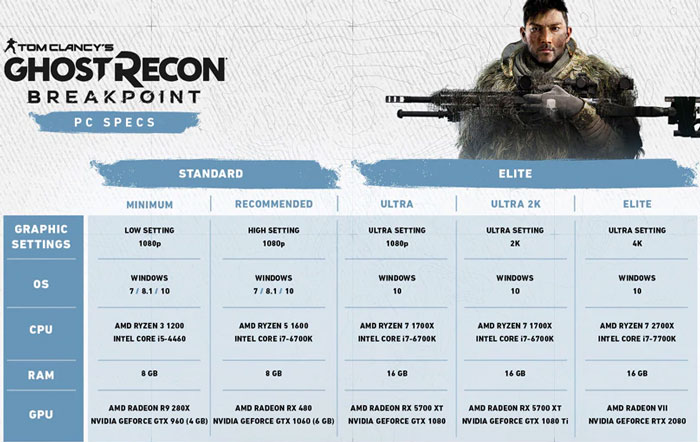 In its email to HEXUS, AMD says that this Ubisoft game supports its FidelityFX dynamic sharpening filter too. It asserts that "FidelityFX delivers significant improvement in image clarity, counteracting the softening caused by other post-process effects." Meanwhile, all PC gamers will benefit from the following:

Posted by globalwarning - Wed 28 Aug 2019 18:35
Interesting to note that they highlight AMD chips first and in bold, not Intel…

globalwarning
Interesting to note that they highlight AMD chips first and in bold, not Intel…

Also, 75GB of drive space for Borderlands 3??? Is there a prize for the game that takes up the most space that I haven't heard about?

Maybe it is because these games use Radeon features so highlighted AMD CPU's as well?
Posted by aniilv - Thu 29 Aug 2019 23:58

Korrorra
Pretty sure it's to make it hard on “other people” to download the game, if you know what I mean. The specs are pretty good overall.

because, if anything, pirating would make it easier (no 0 day 20GB patches for instance)
Posted by Korrorra - Fri 30 Aug 2019 00:26
Well it seems that the only reason companies have these huge games is to make it harder for other people to download it. Or so what I remember reading. Like 30 GB wav sound files, instead of OGG to make them smaller.