Microsoft has announced that it is going to be opening up subscriptions to the Xbox Game Pass for PC sometime after E3 in June. The recipe will be a familiar one, with unlimited access to 100+ curated high-quality titles from over 75 publishers. However, Microsoft says the PC subscription will be carved "specifically for the needs of PC gamers and PC game developers". 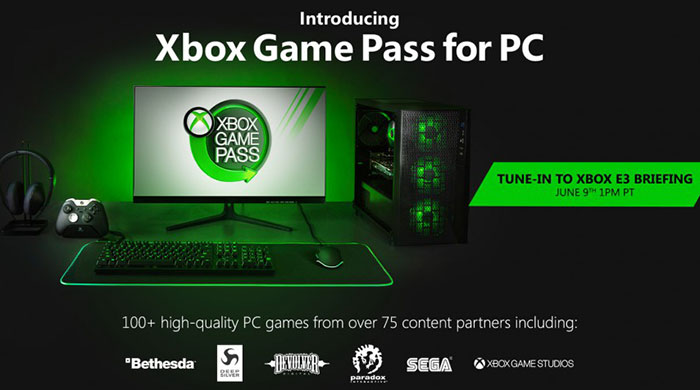 As indicated above, the basics of the Xbox Game Pass for PC will be the same as the service on Xbox. There will be a starting library of 100+ games from like likes of Bethesda, Sega, Paradox, Deep Silver and Devolver. Furthermore, new games from Xbox Game Studios will become available via the Xbox Game Pass for PC on the same day as their global release. These 'first party' titles will include new titles from the likes of Obsidian and inXile studios. Microsoft adds that it is working with over 75 developers and publishers to keep the PC library in tip-top shape across genres, with new games added every month.

If you choose to subscribe to the Xbox Game Pass for PC there will be some fringe benefits too. Specifically, Microsoft will providse discounts in the Microsoft Store on Windows - up to 20 per cent off games currently in the library, and up to 10 per cent off related game DLC and add-ons.

A couple of key pieces of information about the Xbox Game Pass for PC remain undisclosed. We expect Microsoft to share the subscription pricing plans and availability during the Xbox E3 briefing on 9th June. For reference, on the Xbox One console, the Game Pass costs £7.99 per month after an introductory £1 offer. If you watch the show you will get to see 14 Xbox Game Studios games too.

Dashers
What was the thing I signed up to for £1 in December to play Sea of Thieves for a month on my PC, if it wasn't this?

Lol, me too. Hmmm
Posted by YazX - Fri 31 May 2019 16:19
all of them joined forced to end Steam dominance, while this is not bad as competition is always good, but its too late IMO as steam will still be dominant and backed up by its users.
Posted by loftie - Fri 31 May 2019 18:26
How is this different from the current xbox games pass on PC? Is it all new with PC exclusives or have they just expanded the list of play anywhere titles and announced this as a ‘new’ thing?